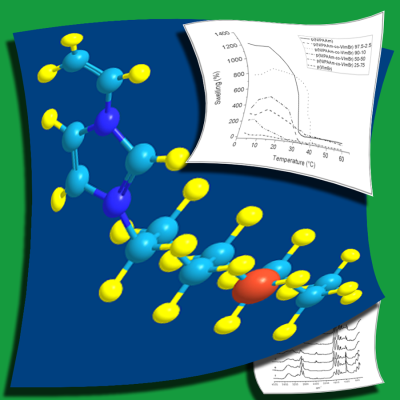 A new series of linear and crosslinked copolymers, obtained from 3-octyl-1-vinylimidazolium bromide (VImBr) and N-isopropylacrylamide (NIPAAm), were prepared by radical polymerization. Namely, VImBr was synthesized from 1-bromooctane and an ionic liquid such as 1-vinylimidazole. NIPAAm was used because it gives raise to well known thermoresponsive (co-)polymers. The copolymers were thoroughly characterized by means of 1H NMR and 13C NMR spectroscopies. Besides, differential scanning calorimetry, Fourier transform infrared spectroscopy, and scanning electron microscopy were also used. Moreover, the swelling behavior and the thermoresponsive properties of the corresponding hydrogels were studied. It was found that the VImBr incorporation into the copolymers does have a dramatic influence on both the thermal properties of the dried materials and the lower critical solution temperature of the corresponding hydrogels. In detail, the glass transition temperature was dependent on the monomer ratios, and ranged from 5 to 155 °C. Analogously, the lower critical solution temperature of the resulting hydrogels ranged from less than 10 up to 38 °C, thus including the physiological temperature. NMR spectroscopies, which were performed on the linear polymers, indicated that the monomers exhibit an alternating tendency resulting in a microstructure in which blocks are not present, at least when the two monomers are in equimolar amounts. © 2014 Wiley Periodicals, Inc. “Poly(ionic liquid)s derived from 3-octyl-1-vinylimidazolium bromide and N-isopropylacrylamide with tunable properties”, J. Illescas, M. Casu, V. Alzari, D. Nuvoli, M. A. Scorciapino, R. Sanna, V.Sanna, A. Mariani, J. Polym. Sci., Part A: Polym. Chem. 2014, 52, 3521–3532