The frontal ring opening metathesis polymerization of dicyclopentadiene using first and second generation Grubbs’ catalysts is reported. To have sufficiently long pot lives, dimethylaminopyridine is added as an inhibitor. By choosing the proper compositions, it is possible to determine the ranges in which pure frontal polymerization occurs. A thorough study on the effect of the above components on the maximum temperatures reached by the front and on its velocities is performed. Namely, temperatures range from 164 to 205 °C depending on the type of catalyst and the above component ratios. Besides, front velocities range from 1.0 to 15.0 cm/min, which are one of the lowest and one of the highest values reported so far in any frontal polymerization experiment reported in literature. This finding allows the complete control of the frontal ring opening polymerization of dicyclopentadiene also in practical applications. © 2014 Wiley Periodicals, Inc, Andrea Ruiu, Davide Sanna, Valeria Alzari, Daniele Nuvoli and Alberto Mariani, J. Polym. Sci., Part A: Polym. Chem. 2014, 52, 2776–2780 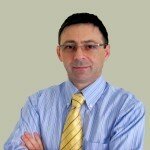